Here is a new banner I made which will be on http://www.podunkradio.com/ It's a simple banner but sometimes I really like it that way. Simple but informative. Please use it on your site if you want.

Diskent was my old band hailing from Haninge 25 km from Stockholm. We wasn't too serious but we had fun and recorded around 40 tracks. Bands that influenced us was MOB 47 and Assück. The line-up was: Micke - Guitar/Vocals, Daniele - Bass/Guitar, Jonny - Drums. We had another band called Pass Out together with 3 other members. Diskent just did one gig. Here is 15 tracks for free. If you want more info or have any questions, send an email to: schizodistro@gmail.com

Check out this if you wanna know how we sounds like.
kl. 21:14 Inga kommentarer: 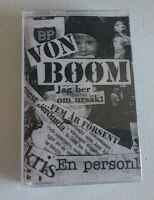 If someone from the band want me to remove this, send an email to schizodistro@gmail.com (Wanna buy this tape? Send an email with a cost proposal)

Von bööm started in 84 and and recorded a demo, some of the songs are released on the LP compilation " Really Fast" # 3. The band played for a while but they decided to quit. In 88 the band started again with a couple of other guys. One demo was recorded. The band broke up again. In 95 the band started once again, and once again with other members. 2004 was the year for the latest re-union. Back with vengeance, old punks never die
I borrowed this info from: http://www.swedishpunk.com

This demo was recorded 1995, three new tracks and one old (Köpt kärlek) I guess that this demo is pretty rare. So download it now if you wanna hear one of all classic swedish bands original from the 80.s

Von Bööm on Youtube (this song is not on the demo)

Pass Out was formed sometimes back in 1994 and existed for about 5 years. Some of our highlights was the gig in Göteborg which was a blast. We did also a gig at Smash the discos who was arranged by Farliga Firman in Stockholm. I noticed that some people liked the youtube clip I have made. So I took our 2.nd and 3.rd recordings and zipped them into a rar.file which you can download for free.

Pass Out was a 6-piece band and we all had different influences I guess it's possible to hear that we're no copycats. I made most of the music and some lyrics and I was most influenced by punk and Oi! And that's probably our main sound. The saxophone made much for the sound too. // Micke (Schizo)

Download link: http://www.mediafire.com/download.php?5e1k2lv6z6a9xm3
Please send your comments or if you want more info to: schizodistro@gmail.com

Here is 3 tracks, the first is from our second recording and the other two is from our third recording.
kl. 14:49 Inga kommentarer: 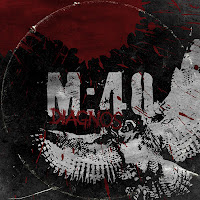 Shit pommes frites. I love Swedish M:40 and when they kickstart with the title track Diagnos is it not hard to understand why. They are extreme, they are so fucking raw, and this is the best they have done so far. It smells Skitsystem and it almost smell Massgrav. The song titles isn't something you will laugh at... "Väck mig vid slutet", "Vid rännstenens skam" and "Vi bär på smittan", find an english-swedish dictionary an check those titles up. The lyrics isn't easy to hear so it sucks that they are almost even harder to read, fucking punk lay out. That's the only disturbing issue with this CD. My favorite tracks is the ultra raw "Diagnos", the desperate "Väck mig vid slutet" and the dark hardcorecrust song "Avfall".

Schizo at your service

Do you need a new logo or wanna get help with any kind of graphic design? I can help you. Get in touch and we will sort something out. Logos, ads, covers etc etc. It won't be expensive at all. Send an email to schizodistro@gmail.com

Here's some stuff I have done...

If you wanna know what I can offer you, take a look at this picture... 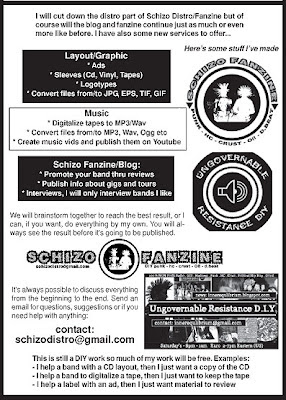 Cult of dom keller from England 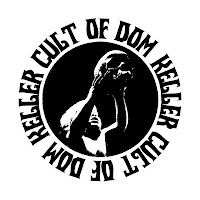 We are Cult of Dom Keller from England, UK and hope you don't mind us reaching out to
spread the gospel. We have released 3 EPs, a single and have finished our debut album out this October which will be out on Reverberation Records ( USA )

We will be touring Europe this October and will be returning to the USA in April 2013.

Formed in 2008, Cult of Dom Keller are four psychedelic generals from England Uk who's kaleidoscopic sonic tapestries weave a mind expanding blend of experimentation, lysergic freak outs and space blues bastardisations that pull the listener into their dark psychedelic world.

Outsider is a real paper fanzine from Sweden which I've made the new logo for the. The editor, Philip, are working with #2 right now. If you want more info about Outsider Fanzine, take a look right here: https://www.facebook.com/pages/Outsider-fanzine/338541439505909

I am really satisfied with this logo. Get in touch [schizodistro@gmail.com] if your band, label, fanzine, distro etc want me to help you with logos, covers and all stuff like that.

From now on will I not review digital releases in Schizo Fanzine. BUT, I will write reviews of digital stuff but only for the blog. So if you want to be reviewed in Schizo Fanzine, get in touch and I will give you my post address. schizodistro@gmail.com