1.Where comes the apathy from? And is Striktlickers your way to convey your feelings?

Borlänge are the poison of God, and will soon be destroyed for the sins that have been going on there and also my another home.

2. You Viktor, arrange the festival War and Hate, and said in Schizo #6 that whats happen in Borlänge stay in Borlänge, but what the fuck, let us know what really happend?

If you wanna know, buy one issue of the book: Det dödliga svärdet nr 6.

3. Who are the members in the band?

Striktlickers was me, A, L, and N. 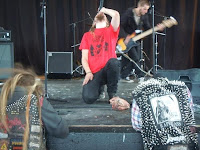 4. You have record a bunch of new songs, and what I've heard of them must I say that it's your best songs so far. I think the sound of everything is better. Have you got any good or bad critics and what will happen with the songs now?

Probably it will rot in the “worlds” of the underground scene, or maybe released of someone that are dumb enough. Some of the new songs are on Youtube nowadays. And some cassettes will maybe be released for the chosen ones, which have fully supported us from the beginning. We where never accepted of collective in the scene, but we created our own world, instead. When one door are closed, another are widely open.

5. Well, I know you said something about a Malaysian label. How did you got in touch?

Contacted thru Myspace, but we they never got in touch again. I can understand why. I don’t see this “labels” as serious. 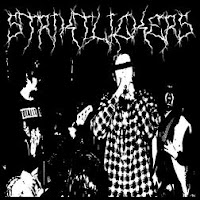 6. What do you think of the PC-Maffia and the PC-police? Is the world already to ruined that it's better to don't care? I think the cover of your new record will provoke tons of people. I also think that's the reason since the punk cannot provoke the society but you have turned it to provoke the punx... is that a sensible thought?

Political correctness have always been a slavery for the mind of “punks”. I thought in the beginning of my travel in the punk scene it was about extreme nihilism, individuality and madness. But in the end, it’s all about alcoholism, decadence and feeling sad for themselves. And listen to bad records, and of course they are some bands that I can fully respect. But they are not many, Återfall nowadays are one of those. And I will always have feelings for band such as Anti-Cimex, Driller killer, Wolfpack and so on. And some other primitive kängpunkbands that are not destroyed of the political correctness and have the right energy within like Dismachine. And it was just not provoking, we showed them the truth, it wasn’t no joke at all.

7. When did you formed the band and what have you released before? Any gigs you wanna talk about? Namedrop some bands that have been important for you? And I guess that the name is consolidated from a few bands? Is it to honour them or what's the deal?

Striktlickers was formed as a allience back in 2006 of me, Pk-Johan and Alice, and was ended in the summer of the 2011, in july. Because we walked different parts, but they are no hard feelings against each other – we just moved on different paths. All our gigs was pretty chaotic, and maybe it’s best to let that sort of things disappear in the dust. The nail in your eye. And also: Rupture and Warcollapse was also two important band for us as inspiration.

8. Since you live in Borlänge, what do you think about the major festival Peace and Love? 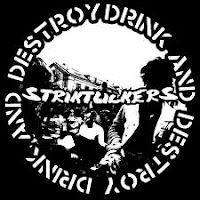 When Peace and love disappeared in Borlänge, something interesting happened. A feeling of emptiness was floating around the town, like grey dust. And it will be interesting in the future, to see what will happend.

9. How do you spend your days? It would be a shock if you say; Wake up in the morning, breakfast, Days of our lives on TV etc..

“I” was 16 years old when Striktlickers started, so then we where into the gymnasium and raised hell. But we wen’t out better then the most. Alice now have his exam in engineering, from the university. I am doing my studies and training, and nightly activities. L are now working, and have his own world, and N have moved on, doing studies and a power electronics-project called Marritt. And the rest are secrets, that you will have to be told in person.

10. Alcohol, drugs...? Malmö call themself Crime City, But Borlänge doesn't have a good reputation either. Is it just misery?

All towns are all the same, so fucking lame. But alcohol and drugs are poisonous for some people, who become slaves of it, and others that can’t handle it. But I don’t think that is really important, and if you can’t handle it: Suit yourself.

12. What do you think about the swedish punk scene nowadays? And what is punk for you?

A mental prison, with their barriers that you have to destroy. I would see it as active nihilism for some, and slavery for others.

13. What makes you to carry on with Striktlickers? And what about the future, when it comes to the band, you will hopefully release this new record, what will happen more?

Striktlickers are now forever dead and the crown, you never can carry. And wil be like salt in an open soar.

14. Are you satisfied with this pretty short interview? Otherwhise, ask me a better question if you want. Well, end this now just how you want. Cheers!

No, I am not. But just wanted to have the last nail in this coffin. And let it sink. And my last words are: Death to Paulus Invictus! 22:th july, 13. 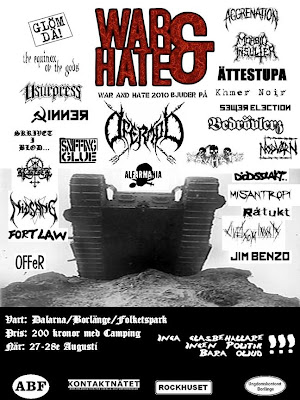 Artists and bands I dislike

Unwritten rules are something I really hate. And it's really weird that people who belong to the punk collective have so many unwritten rules. Here's 5 artists/bands that you really have to like. But I don't like them because I am a rebel hahaha...

Johnny Cash.
I really like country and singer/songwriters, but I don’t like Johnny. A few songs are alright but too much of them just bore me to death.

GG Allin.
Well, maybe he was a symbol for lunatic rock n roll rebellion but I don’t consider him as tough. I think that people who worship him is embarassing. And even if I like some of his songs is it all fans that disturb me more than himself.

Elvis Presley.
I know how important he was for the youth in the 50s & 60s but when it comes to the music can I give you 1000 better artists in this rock n roll genre. Rock n roll was so needed for the youths in USA at that time. But now... well, open your eyes and ears and you'll find artists that is so much better than Elvis.

The Clash.
When people from big newspapers are gonna review a punk album will they always mention The Clash and Sex Pistols. That's because it's the only 2 bands he/she know about, so it's significant for a really bad reporter. I like Sex Pistols, but I don't like The Clash. Or it's actually the voice of Joe Strummer I don't like.

Bob Marley.
Yes he was a true legend and I really love reggae and ska but artists like Junior Murvin, John Holt, Max Romeo is so much better than Bob Marley. He is just boring.

Bands: Per Capita from Germany

First time I heard Per Capita from Munich, Germany was for around 4 years ago when Gaz from Ungovernable Resistance played them at his radio show. I have liked them much since then. They have released a new split 12" with the Hungarian band Freedom is a lie. I will review that album later on.

If you wanna listen to this split 12", check out the bandcamp site:
http://percapitacrust.bandcamp.com/album/per-capita-freedom-is-a-lie-12-split

And here's a video for their song "Doomed".


Wohoo... I have just started the work with Schizo Fanzine #10. I think it will be 6 interviews, I have already sent questions to two bands. But I will not reveal any of them before later. There will also be a Swedish punk report. It will probably be 40 pages, and I will try to mix as much as possible.

I will make a shout out that I am always looking for scene reports, and co-writers since I want a good mix. If you want me to review your releases, get in touch for my post address. If you have any suggestions or questions, get in touch...

Send your emails to: schizodistro@gmail.com

A bit tired at Augustibuller

From now on will I not review digital releases in Schizo Fanzine. BUT, I will write reviews of digital stuff but only for the blog. So if you want to be reviewed in Schizo Fanzine, get in touch and I will give you my post address. schizodistro@gmail.com